In a “stable” market, NPD sees U.S. print sales fall 1.6 million units in July, typically a month for some losses.

In his discussion, McLean writes: “The losses in July are historically normal and were a little shallower this year, resulting in a 1 point gain since the start of the year. July ended down 6% for the year to date on a total print volume of 414 million units, or 26 million units in 2021 but 51 million units in 2019.”

So the result is a stable field, “pretty consistent trends through the first seven months of the year,” McLean says. “I don’t expect a major change of course before Labor Day; it looks increasingly likely that we’ll see additional market moves heading into the fourth quarter, and for now, the greater economic volatility isn’t hitting too hard. 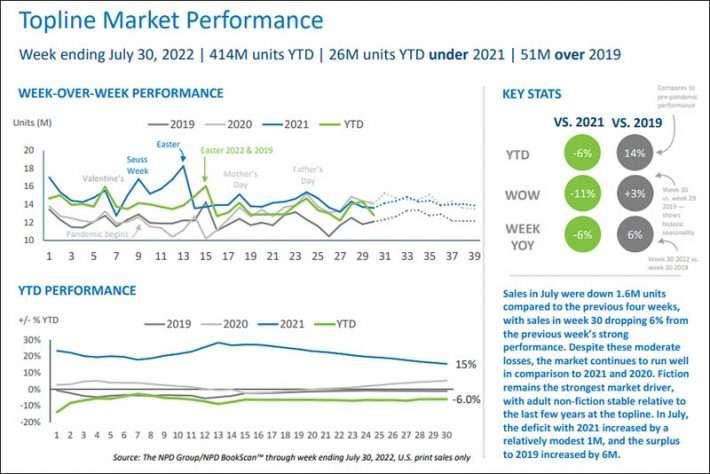 As for the bestseller charts, the July bestsellers in the United States were all fiction, McLean points out, and nine of the top 10 were adult fiction.

Four of the top 10 were top-listed stocks – again, a closely watched point in the US market. The four headlining titles have their titles in blue below. Only one of these bestsellers is in hardcover.

As in our recent reports, you’ll see author Colleen Hoover dominate the Top 10, this time with half of that top echelon, namely five of the top 10 titles. 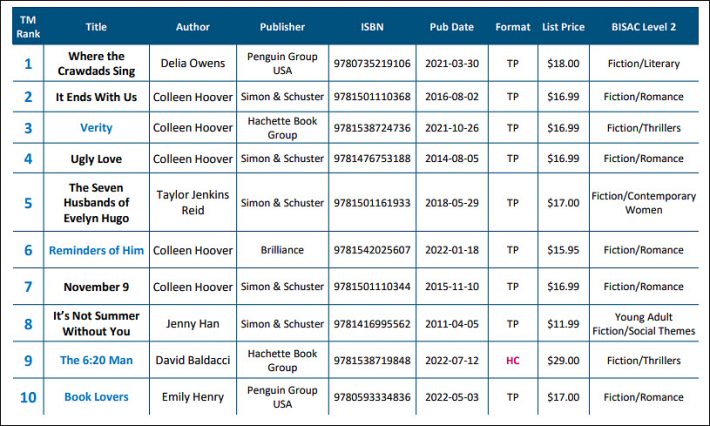 To learn more about Publishing Perspectives on the coronavirus pandemic and its impact, click here.

Porter Anderson is a non-resident member of Trends Research & Advisory, and was named International Business Journalist of the Year at the London Book Fair’s International Excellence Awards. He is the editor of Publishing Perspectives. He was previously associate editor of The FutureBook at The Bookseller in London. Anderson was a senior producer and anchor for CNN.com, CNN International and CNN USA for more than a decade. As an art critic (National Critics Institute), he has collaborated with The Village Voice, the Dallas Times Herald and the Tampa Tribune, now the Tampa Bay Times. He co-founded The Hot Sheet, a newsletter for authors, which is now owned and operated by Jane Friedman.